At the end of the first qualification round, YC ranked 8th with a record of 7 wins and 2 losses. This commendable first-round performance qualified the Leptechons to compete in the playoffs and to be an alliance captain, which provided them the opportunity to select their team’s alliance. YC’s alliance lost 2 of the 3 matches in a closely contested quarterfinal against the alliance that became the regional champions. YC’s alliance partners were Team 4738 Patribots from San Diego and Team 5137 Iron Kodiaks from San Marcos, California.

This year’s game, INFINITE RECHARGESM, required two alliances to collaborate for the protection of FIRST City from the approaching asteroids caused by a distant space skirmish. In order to energize their Shield Generator for maximum protection, each alliance, along with their trusty droids, raced to collect and score Power Cells. To activate stages of the Shield Generator, droids manipulated their Control Panels after scoring a specific number of Power Cells. As the end of the match neared, droids raced to the Rendezvous Point to make their Shield Generator operational in order to protect the city!

2. Moving from the Initiation Line

Following the Autonomous period, drivers took control of the droids for the remaining 2 minutes and 15 seconds of the match. During this phase, alliances scored points by:

4. Hanging from the Generator Switch

5. Getting the Generator Switch to the level position

Since its inception three years ago, the Yuma Catholic Robotics Club has improved its outcome during competition each season. The success of the team would not have been possible without the support of our mentors and sponsors. We appreciate the countless hours invested in our program by our mentors, Alejandro Frias and Christopher Stubbs from General Motors Desert Proving Ground, professors Diana Saldana and Sam Peffers from UofA-Yuma, and engineering student Jesus Gandara. We wish to recognize and to thank our generous sponsors General Motors Desert Proving Ground, Adult and Pediatric Rehabilitation, Fisher Dodge, Fisher Chevrolet, YC Booster Club,  PG Communications Technologies, Gowan Company, French Perfumes, La Bodega, Armijo Insurance Agency, 21st Century, Buena Vista Mail Center, RL Jones Customhouse brokers, and Panda Restaurant Group. Without their support, the team wouldn’t have been able to compete!

In conclusion, I wish to congratulate and recognize this group of outstanding YC students who demonstrated gracious professionalism, commitment, knowledge, passion, and hard work! We appreciate the leadership, encouragement, and guidance provided by our team captain, Ragde Chaira, and the YC robotics coach, Mr. Ramon Cid. If you are interested in supporting this team with mentoring or supporting Yuma Catholic High School’s Robotics Club through donations, please contact Mr. Cid at rcid@yumacatholic.org or contact Yuma Catholic High School. 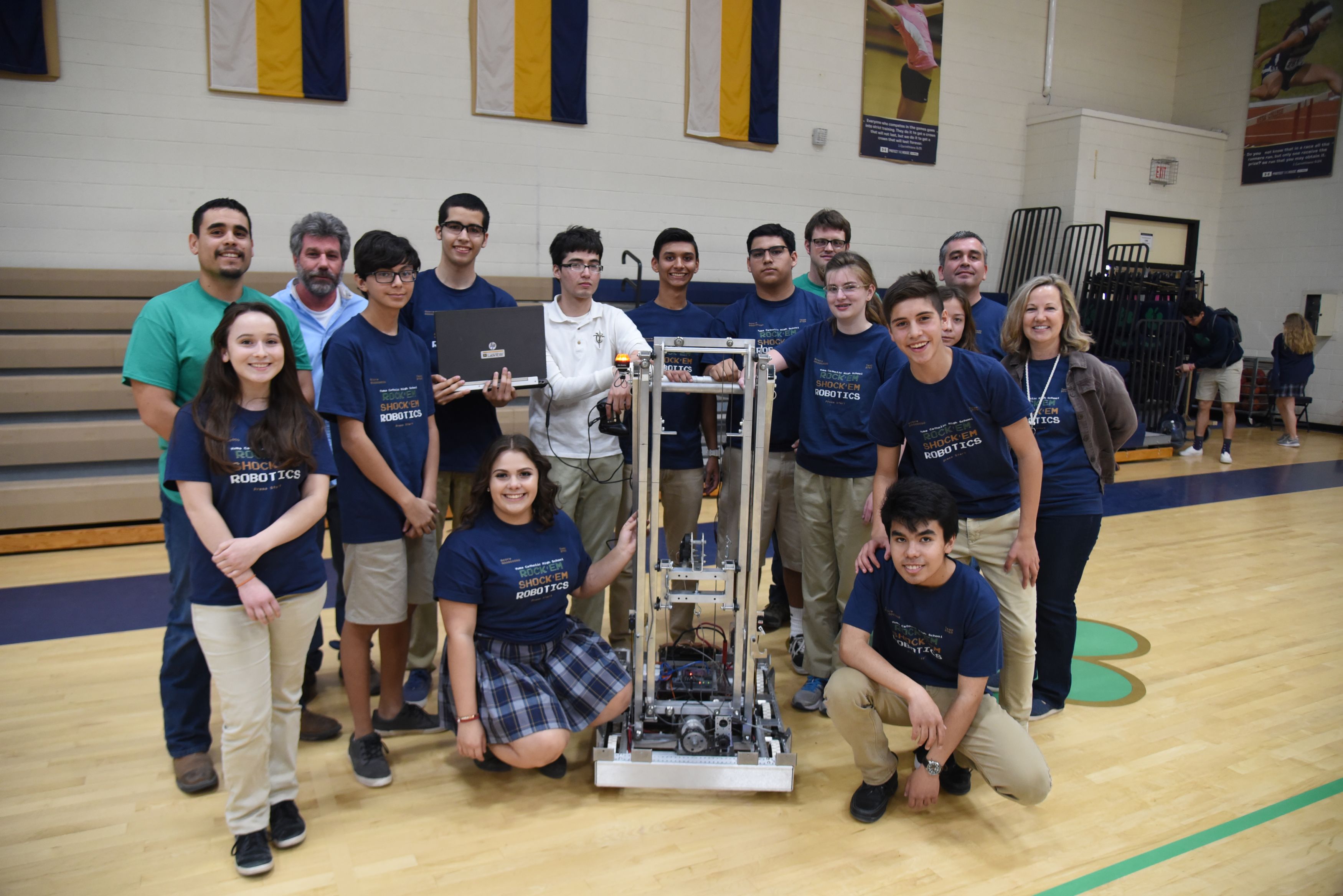 It has been a month since the Robotics Club competed at the FIRST Robotics competition in Flagstaff, Arizona. It was academically engaging, substantially social, and it captivated all of us. Around sixty teams, new and old, from around the area as well as a few international teams attended this competition. It was tough, but we performed to the best of our abilities.

Some of the various facets we learned about FRC Robotics:

It is more than just robots; it is about communicating and cheering for other teams. Meeting other teams and working with them is essential, in and outside the playing field. We all work together to improve our robots and learn new strategies.

Using social media to get the team’s name out there as much as possible. A very important job we did not know existed was “media person(s).” A member(s) of a team that goes as far as creating apps, live broadcasting, and designing ecommerce merchandise for their team.

When we first arrived to the Skydome, where competition was being held, the first thing we did was back away from the pit. The drive team was always occupied with the robot, and even though our pit was not as furnished as others, it was too compact for seven people to move around easily. Most members were in stands cheering and taking notes. I, as president, and the safety captain had daily and hourly meetings with other teams’ presidents and safety captains. Judges also came by occasionally to interview members. Scouts also conducted interviews every now and then to take note of other robots’ abilities and weaknesses. Each day was not much different than the other except for the last day’s elimination round and award ceremony.

It has been a full month since competition and exciting plans for next year are being arranged. Next year, the Robotics Club plans to attend not one, but two competitions; one in-state and one that is yet to be announced. Currently, we are in the process of cleaning out our workshop and selecting next year’s leader positions. Next week, we will announce a public invitation to join the club and meet their future robotics leaders.

“Although we aren’t a team with abundant experience, we will surely try our best and have fun while at it” - Marlon Olivas, future Robotics Club President